Its not long now until The Refasioners challenge, the brainchild of the very lovely Portia, starts and when she asked me to join in (after I had picked my jaw up off the floor!) I had a few ideas buzzing around my head.  I had one main one which remains a secret, but one of the things I really wanted to make, and had a need for too, was summer night clothes.  My initial idea was to use the Sorbetto top (more on that later) with some pyjama bottoms cut off at short length but then Tilly and the Buttons released her new patterns and I couldn't resist so bought both Fifi and Bettine with the intention to use the Fifi for this refashion. 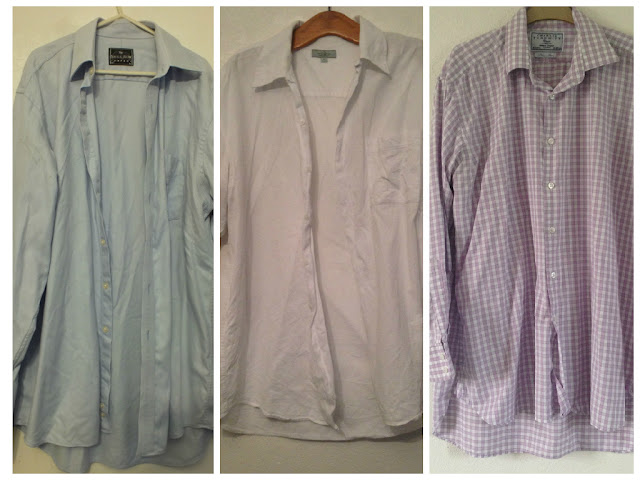 My starting shirt is the lilac one on the right above.  In general it was in quite good condition, just slightly worn out on the collars and cuffs, so I didn't have to worry when cutting out.  The top is supposed to be all cut on the bias but as fabric on shirts is limited, I only cut the front and the cups (is that the right word??) on the bias, the three back pieces are all cut on the straight grain from various different places on the shirt.  I don't think this affects the garment that much, but maybe I will notice more when I have made one properly.

The bias binding is satiny and was bought, rather than making my own which I would normally do.  I have additionally put bias binding along the top of the cups which isn't in the pattern due to a minor idiot moment on my part where I hemmed the top of the cup to the wrong side!  Design feature!!  The top is made beautifully with lovely French seams everywhere, which makes it feel so much more luxurious.   I love the look of this top, and at some point I will revisit it but only after a few changes.  The pattern is obviously designed for less well endowed ladies so it doesn't *ahem* sit so well on me!  I will still wear it in the privacy of my bedroom but there will definitely be no modelled shots and before I make it again I will be doing some serious altering to those cups!! The good news is the rest of the top fits beautifully. 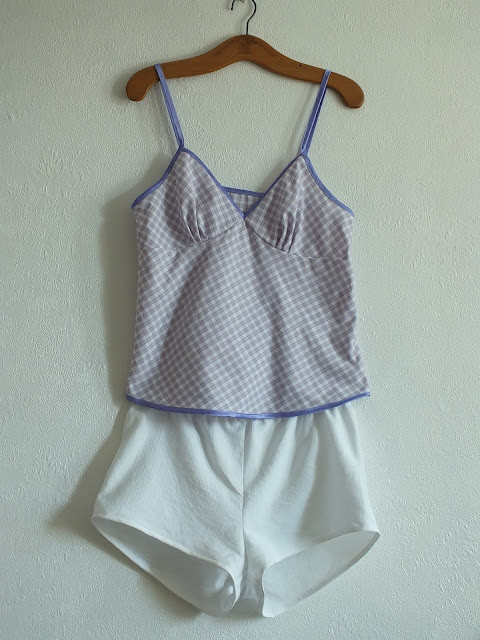 The shorts came from the middle shirt in the picture above, which is actually white.  This shirt has a waffley texture and was actually quite worn out so I struggled to find enough fabric in it.  I did, but it wasn't all cut on the correct grain although I can't remember now which bits were cut from where.  It went together really quickly and easily with French seams again, and I finished the hems with bias binding just because I had it to hand and like the finish.  I will definitely be making more of these, they are so comfortable!! 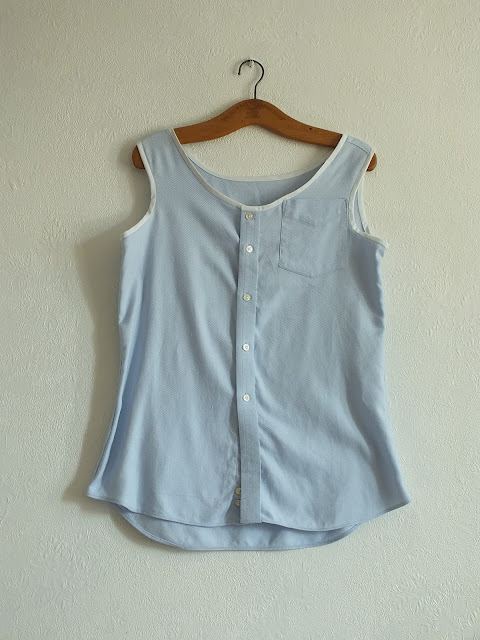 Finally, to compensate for my Fifi being a bit too indecent to wear in public (my parents will be visiting soon and I wouldn't want to shock them before they've had their morning coffee!) I went back to my original idea and made a Sorbetto top.   This was such a simple refashion, I just separated the front from the back of the shirt. traced along the outline and cut them out, then sewed them back together omitting the bust darts and centre front pleat.  I then finished the armholes and neckline with bias binding, after carefully unpicking the top corners of the pocket to move them out of the way, then sewing them back down later.  I like the look of the pocket on the shirt so didn't want to unpick it completely.  I also used the original hem so no hemming, yay!  The only other thing I had to do was put an extra button right at the top. 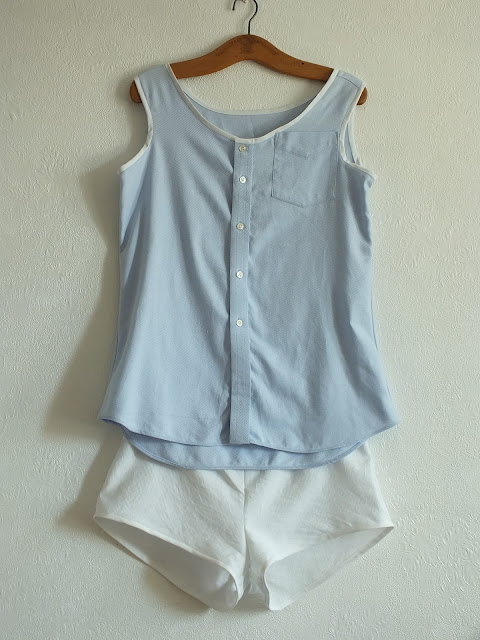 So, one and a half new night sets from three old shirts - bargain!  I am really looking forward to seeing what everyone comes up with for this challenge and there are prizes to be won!  It's going to be amazing and it all kicks off on Portia's blog on Monday - Get shirty!! 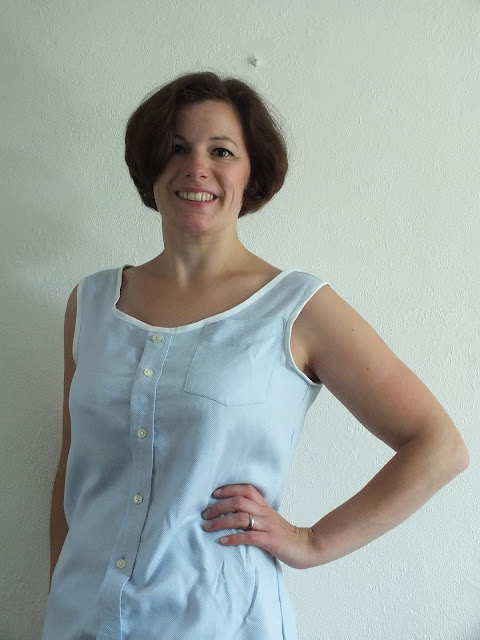