Me Made May Roundup and New Dolores Top!


So it's over already!  I cannot believe how quickly May has gone this year but it has certainly been a busy month which always helps to speed things along.  Moving house has taken up so much time over the past month, much longer than I anticipated!  I spent the first week of May packing up, we moved on 7th May and from then I was back to work and the normal daily routine whilst trying to find clothes amidst the chaos!

This was the pledge I made prior to taking part:

'I, Jenna of Just Sew Jenna, sign up as a participant of Me-Made-May '15. I endeavour to wear clothes (including knickers but not bras or tights) made by or refashioned by me each day for the duration of May 2015.  I also pledge to try and match up gaps in my and my daughter's wardrobe with fabric and patterns already in my possession.'

Well I succeeded in the first part and did only wear things made or refashioned by me, including knickers, but I have to confess I did not do a lot of fabric and pattern matching.  I did locate the gaps in my daughter's wardrobe, and they are big!  She has just had a huuuuge growth spurt (long awaited) so now needs new everything including knickers...I have a lot of sewing ahead of me!  However I did actually buy new patterns for her as I only have a few left in her size range (and I really wanted some new patterns, sometimes it's as simple as that!).


I made some new trousers for me which were very much needed and filled a gap so I suppose I have not completely failed, I just envisaged that I would come up with more of an actual plan.  Not being a very planny person I really shouldn't be surprised!  I have come up with some vague plans for the fabric I have but I have bought yet more fabric so I do feel like I have failed with part of my pledge.

As a way to monitor my fabric habit I have started to make a note of how much has come into my possession during 2015 versus how much has gone out i.e. been used.  At the moment I have still bought more but the gap is closing and hopefully with a bit of intense sewing over the next few weeks to refill the Child's wardrobe the outgoings might actually overtake the incoming.  At least I have identified that I have a problem!

The most worn of all my clothes this month has been my two pairs of Ultimate Trousers which I wore for five days each.  Part of this was weather related, had we had better weather there would have been more skirt and dresses but we didn't and I think it just reinforces to me that I did need another pair of trousers.  I will go on to make more in the autumn too.  If I can wear trousers that fit me like that I might wear more of them!

I also made a lovely new Dolores top (pattern from the amazing Zoe, rather an apt end to the month I thought) to wear on the last day.  I have actually had the Liberty jersey I used for this in my stash for far too long, and as with special fabrics that don't get used straight away the longer I put off making this into something the harder it became.  It is really drapey and I am not a big fan of drapey knits, either wearing or sewing, so I just did not know what to do with it.  I knew the Dolores top would be perfect for it though and I love the result.

I used just under a metre of this top, which I sized up to be slightly slouchier than I would normally go for.  (I have just over a metre left which I am giving to my Mum in exchange for some other jersey that I've had my eye on - matching mother and daughter tops not quite so cute in adults??)  I am really happy with how this came out, and it looks really nice with my new trousers so a lovely last outfit of the month.

Looking at the pictures below it is clear I have colour preferences, but it is nice to see all the photos (minus 1 - I don't know where that went!) in one place.  Next up, some more vintage pattern sewing for a wedding next weekend - if I can get it finished in time! 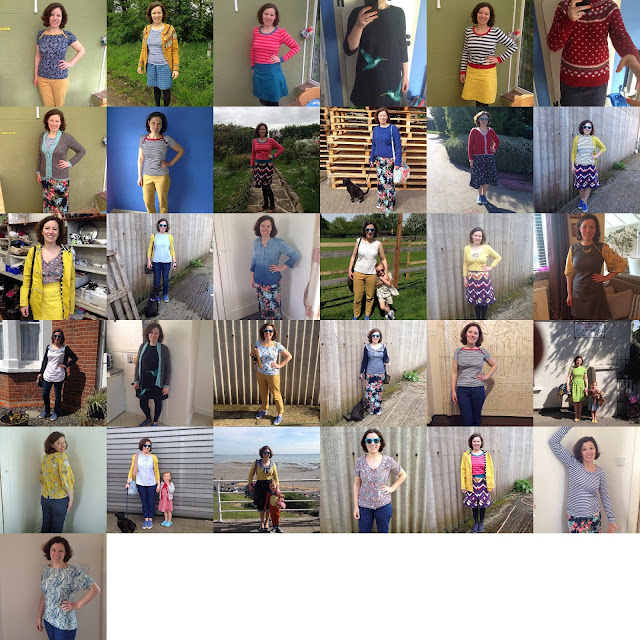